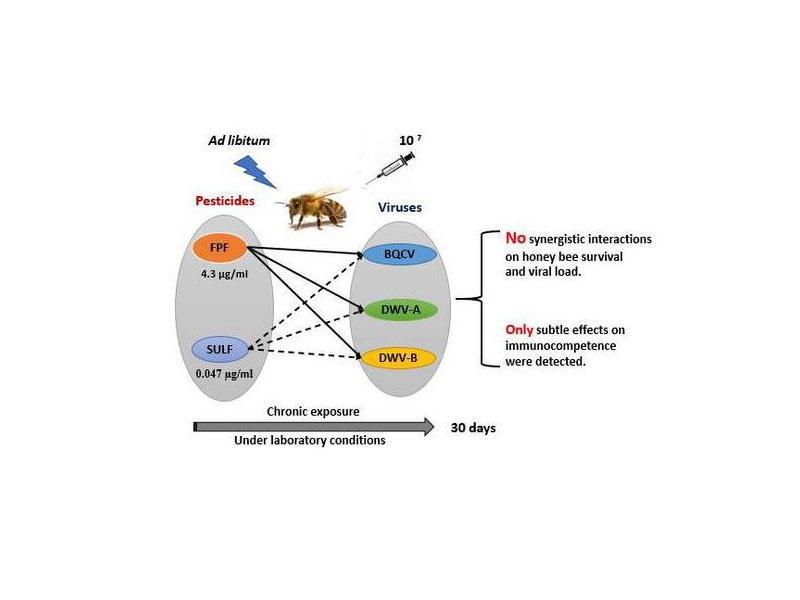 The decline of insect pollinators threatens global food security. A major potential cause of decline is considered to be the interaction between environmental stressors, particularly between exposure to pesticides and pathogens. To explore pesticide–pathogen interactions in an important pollinator insect, the honey bee, we used two new nicotinic acetylcholine receptor agonist insecticides (nACHRs), flupyradifurone (FPF) and sulfoxaflor (SULF), at sublethal and field‐realistic doses in a fully crossed experimental design with three common viral honey bee pathogens, Black queen cell virus (BQCV) and Deformed wing virus (DWV) genotypes A and B. Through laboratory experiments in which treatments were administered singly or in combination to individual insects, we recorded harmful effects of FPF and pathogens on honey bee survival and immune gene expression. Though we found no evidence of synergistic interactions among stressors on either honey bee survival or viral load, the combined treatment SULF and DWV‐B led to a synergistic upregulation of dicer‐like gene expression. We conclude that common viral pathogens pose a major threat to honey bees, while co‐exposure to these novel nACHR insecticides does not significantly exacerbate viral impacts on host survival in the laboratory.