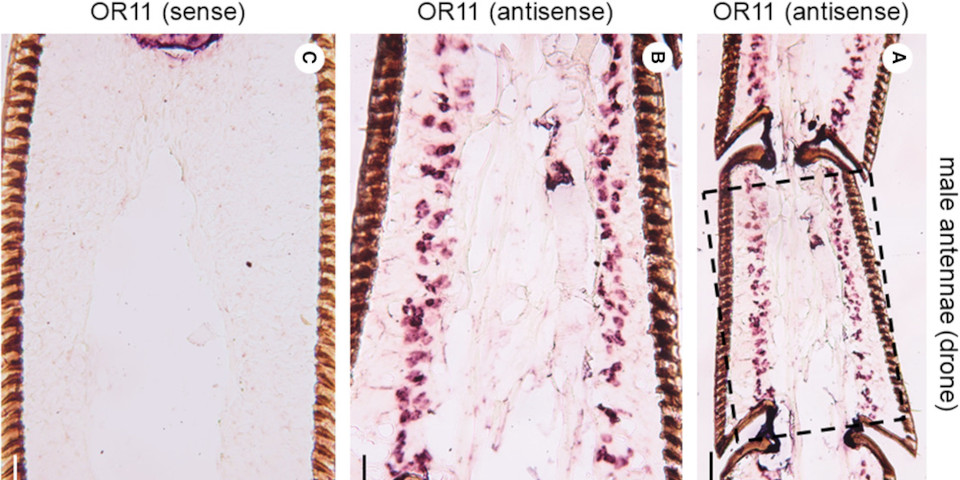 In the European honey bee (Apis mellifera), the olfactory system is essential for foraging and intraspecific communication via pheromones. Honey bees are equipped with a large repertoire of olfactory receptors belonging to the insect odorant receptor (OR) family. Previous studies have indicated that the transcription level of a few OR types including OR11, a receptor activated by the queen-released pheromone compound (2E)-9-oxodecenoic acid (9-ODA), is significantly higher in the antenna of males (drones) than in female workers. However, the number and distribution of antennal cells expressing male-biased ORs is elusive. Here, we analyzed antennal sections from bees by in situ hybridization for the expression of the male-biased receptors OR11, OR18, and OR170. Our results demonstrate that these receptors are expressed in only moderate numbers of cells in the antennae of females (workers and queens), whereas substantially higher cell numbers express these ORs in drones. Thus, the reported male-biased transcript levels are due to sex-specific differences in the number of antennal cells expressing these receptors. Detailed analyses for OR11 and OR18 in drone antennae revealed expression in two distinct subsets of olfactory sensory neurons (OSNs) that in total account for approximately 69% of the OR-positive cells. Such high percentages of OSNs expressing given receptors are reminiscent of male-biased ORs in moths that mediate the detection of female-released sex pheromone components. Collectively, our findings indicate remarkable similarities between male antennae of bees and moths and support the concept that male-biased ORs in bee drones serve the detection of female-emitted sex pheromones.