Contact varroacidal efficacy of lithium citrate and its influence on viral loads, immune parameters and oxidative stress of honey bees in a field experiment 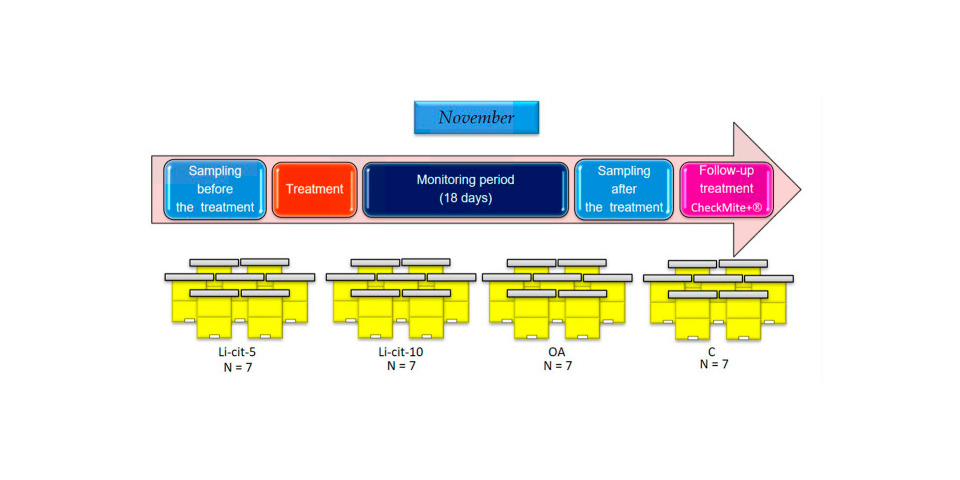 With an almost global distribution, Varroa destuctor is the leading cause of weakening and loss of honey bee colonies. New substances are constantly being tested in order to find those that will exhibit high anti-Varroa efficacy at low doses/concentrations, without unwanted effects on bees. Lithium (Li) salts stood out as candidates based on previous research. The aims of this study were to evaluate Li citrate hydrate (Li-cit) for its contact efficacy against Varroa, but also the effect of Li-cit on honey bees by estimating loads of honey bee viruses, expression levels of immune-related genes and genes for antioxidative enzymes and oxidative stress parameters on two sampling occasions, before the treatment and after the treatment. Our experiment was performed on four groups, each consisting of seven colonies. Two groups were treated with the test compound, one receiving 5 mM and the other 10 mM of Li-cit; the third received oxalic acid treatment (OA group) and served as positive control, and the fourth was negative control (C group), treated with 50% w/v pure sucrose-water syrup. Single trickling treatment was applied in all groups. Both tested concentrations of Li-cit, 5 and 10 mM, expressed high varroacidal efficacy, 96.85% and 96.80%, respectively. Load of Chronic Bee Paralysis Virus significantly decreased (p < 0.01) after the treatment in group treated with 5 mM of Li-cit. In OA group, loads of Acute Bee Paralysis Virus and Deformed Wing Virus significantly (p < 0.05) increased, and in C group, loads of all viruses significantly (p < 0.01 or p < 0.001) increased. Transcript levels of genes for abaecin, apidaecin, defensin and vitellogenin were significantly higher (p < 0.05-p < 0.001), while all oxidative stress parameters were significantly lower (p < 0.05-p < 0.001) after the treatment in both groups treated with Li-cit. All presented results along with easy application indicate benefits of topical Li-cit treatment and complete the mosaic of evidence on the advantages of this salt in the control of Varroa.