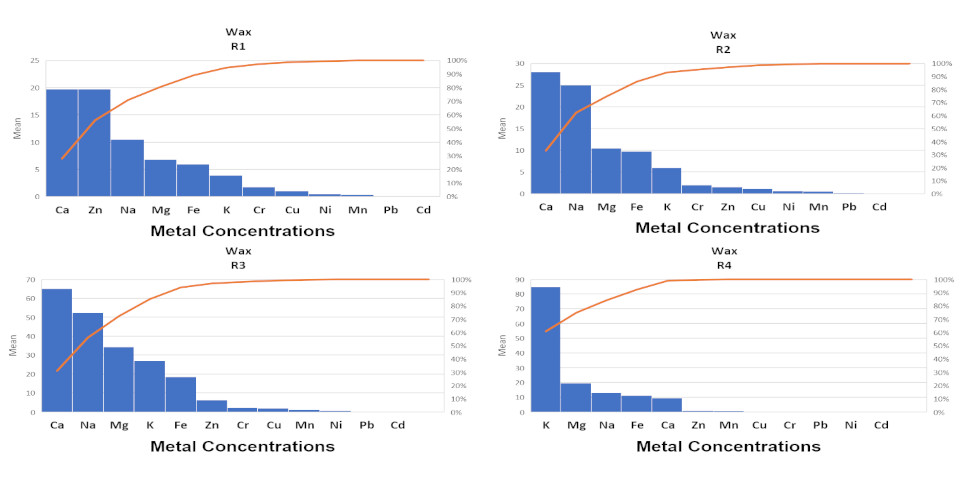 Honeybees and their products are good bioindicators because they are inextricably linked to the natural environment they inhabit. The objectives of this research were to detect and identify pollution extent by the levels of metals in honeybees (foragers) (Apis mellifera jemenatica) and beeswax, including some elements such as K, Ca, Na, Mg, Fe, Mn, Cu, Zn, and heavy metals such as Pb, Ni, Cd, Cr, in different environments in Makkah region of Saudi Arabia. Sampling regions included were as follows: R1, highways; R2, urbanized areas; R3, industrialized areas; and R4, ecologically clean areas. Results of the present study indicating the metal contents in honeybees collected from apiaries in different environmental regions show that the concentrations (mg/g) of metals in bee bodies and wax are found to be of significant value (P < 0.05); the highest value among all metals was found to be 0.000. However, it was found that the regions containing the highest concentrations of metals were industrialized areas (R3), urbanized areas (R2), and highways (R1), respectively, whereas the lowest concentration of metals was found in ecologically clean areas (R4). The obtained results showed that the concentrations of metals detected in honeybee samples were higher than those detected in wax samples in all the studied areas. Moreover, it is safe to say that bees and wax are regarded as good indicators of environmental pollution by toxic substances (metals).