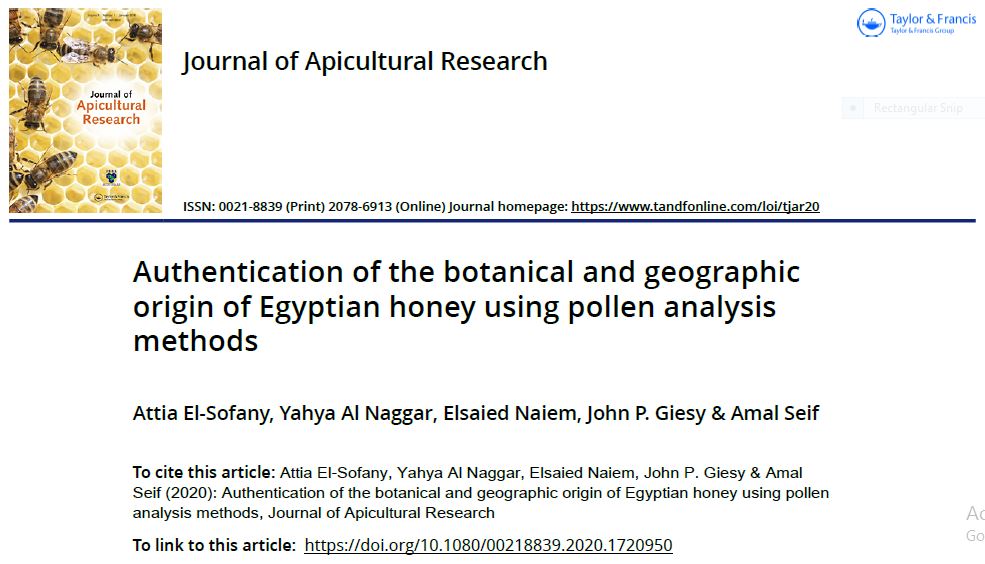 Authentication of the botanical and geographic origin of Egyptian honey using pollen analysis methods to use pollen analyses to authenticate the botanical origin and labeling of seven kinds of Egyptian honey and to identify sources of pollen used by honey bees in Egypt. Honeys are labeled, based on sources of pollen, which are usually provided by Egyptian beekeepers are classified as; clover, sidr, citrus, banana, cotton, Brazilian peppertree, and sunflower honey. During 2016–2017, absolute and relative numbers of pollen types were collected synchronously from apiaries and recta of worker bees from which samples of honey were also collected. Pollen from 20 plant taxa, belonging to 14 families was observed. Results of pollen analysis confirmed identities of sources of honey and nectar, as indicated and labeled during collection for all honeys except cotton, sunflower, and Brazilian pepper honeys, where, the predominant types of pollen identified in honey and recta of bees were: Zea mays (69%) in cotton honey, Cucurbitaceae (79%) in sunflower honey, and Eucalyptus sp. (52%) in Brazilian pepper honey. These data suggest that these honey should be re-classification (labeling) as Zea mays, cucurbits, and Eucalyptus honey instead of cotton, sunflower, and Brazilian pepperhoney, respectively. Most of the honeys screened contained pollen grains (PGs) of Echium sp. and Trifolium alexandrinum, which indicated their wide geographical distributions in Egypt. Quantitative data of PGs per 10 g of honey indicated unequal geographical distributions of appropriate plants for use by bees in Egypt.