Mode of Transmission Determines the Virulence of Black Queen Cell Virus in Adult Honey Bees, Posing a Future Threat to Bees and Apiculture 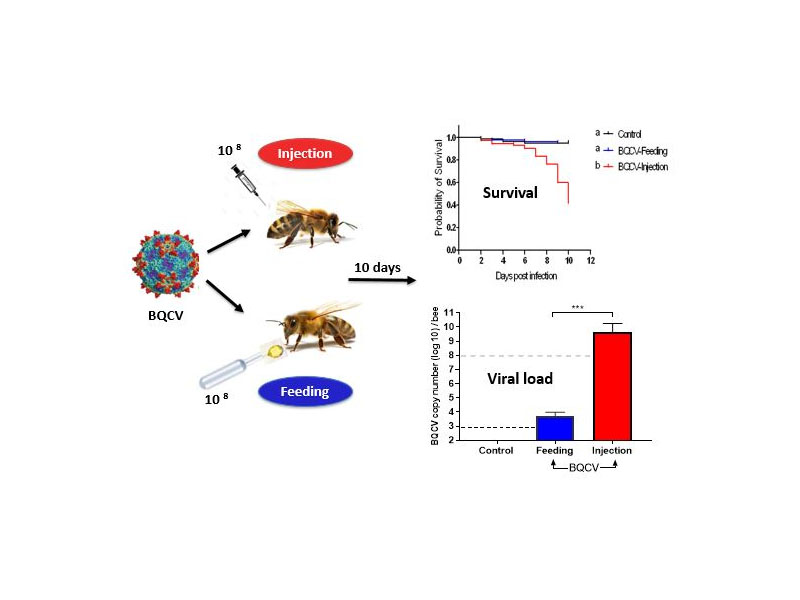 Honey bees (Apis mellifera) can be infected by many viruses, some of which pose a major threat to their health and well-being. A critical step in the dynamics of a viral infection is its mode of transmission. Here, we compared for the first time the effect of mode of horizontal transmission of Black queen cell virus (BQCV), a ubiquitous and highly prevalent virus of A. mellifera, on viral virulence in individual adult honey bees. Hosts were exposed to BQCV either by feeding (representing direct transmission) or by injection into hemolymph (analogous to indirect or vector-mediated transmission) through a controlled laboratory experimental design. Mortality, viral titer and expression of three key innate immune-related genes were then quantified. Injecting BQCV directly into hemolymph in the hemocoel resulted in far higher mortality as well as increased viral titer and significant change in the expression of key components of the RNAi pathway compared to feeding honey bees BQCV. Our results support the hypothesis that mode of horizontal transmission determines BQCV virulence in honey bees. BQCV is currently considered a benign viral pathogen of adult honey bees, possibly because its mode of horizontal transmission is primarily direct, per os. We anticipate adverse health effects on honey bees if BQCV transmission becomes vector-mediated.