Diversity and Global Distribution of Viruses of the Western Honey Bee, Apis mellifera 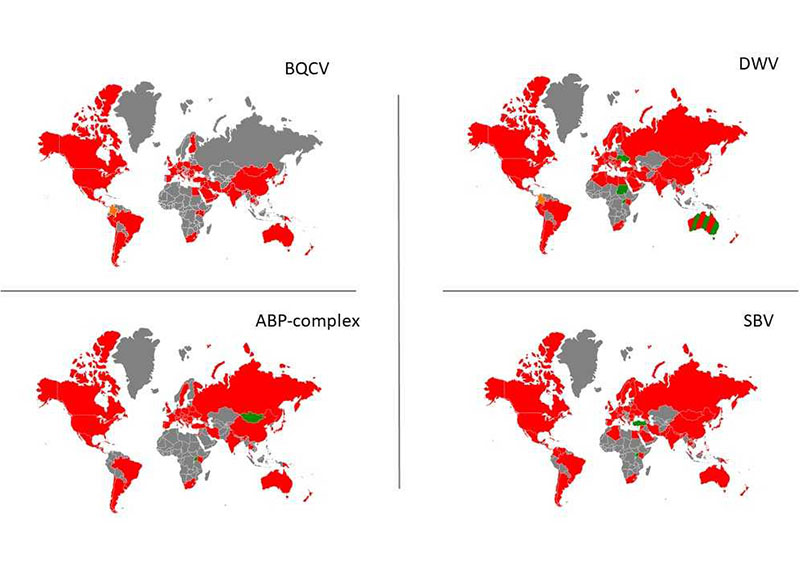 In the past centuries, viruses have benefited from globalization to spread across the globe, infecting new host species and populations. A growing number of viruses have been documented in the western honey bee, Apis mellifera. Several of these contribute significantly to honey bee colony losses. This review synthetizes the knowledge of the diversity and distribution of honey-bee-infecting viruses, including recent data from high-throughput sequencing (HTS). After presenting the diversity of viruses and their corresponding symptoms, we surveyed the scientific literature for the prevalence of these pathogens across the globe. The geographical distribution shows that the most prevalent viruses (deformed wing virus, sacbrood virus, black queen cell virus and acute paralysis complex) are also the most widely distributed. We discuss the ecological drivers that influence the distribution of these pathogens in worldwide honey bee populations. Besides the natural transmission routes and the resulting temporal dynamics, global trade contributes to their dissemination. As recent evidence shows that these viruses are often multihost pathogens, their spread is a risk for both the beekeeping industry and the pollination services provided by managed and wild pollinators.