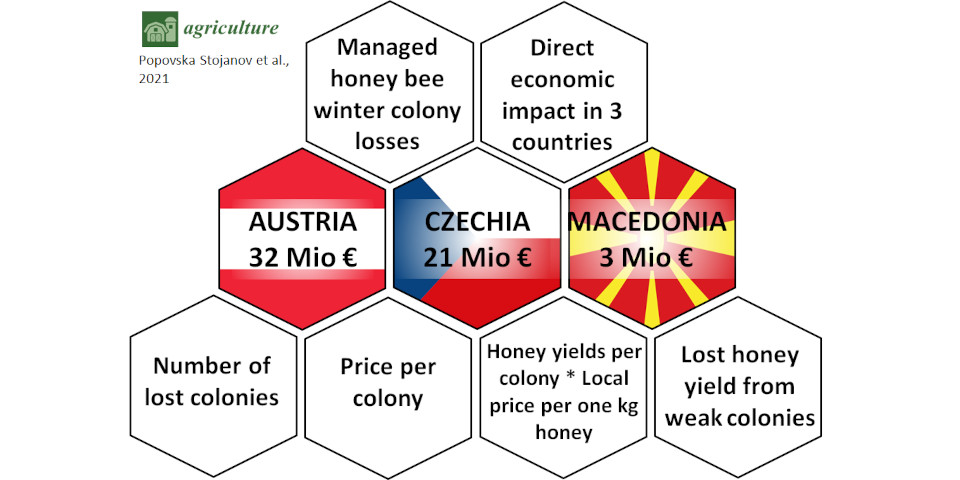 Honeybees are of great importance because of their role in pollination as well as for hive products. The population of managed colonies fluctuates over time, and recent monitoring reports show different levels of colony losses in many regions and countries. The cause of this kind of loss is a combination of various factors, such as the parasitic mite Varroa destructor, viruses, pesticides, management practices, climate change, and other stress factors. Having in mind that the economic aspect of honeybee colony losses has not been estimated, a pioneer effort was made for developing a methodology that estimates the economic impact of honeybee colony losses. Winter loss data was based on 2993 answers of the COLOSS standard questionnaire survey of honeybee winter colony losses for 2016/2017. In addition, market and financial data were used for each country. In a comparative analysis, an assessment on the economic impact of colony losses in Austria, Czechia, and Macedonia was made. The estimation considered the value of the colonies and the potential production losses of the lost colonies and of surviving but weak colonies. The direct economic impact of winter honeybee colony losses in 2016/2017 in Austria was estimated to be about 32 Mio €; in Czechia, 21 Mio €; and in Macedonia, 3 Mio €. Economic impact reflects the different value levels in the three countries, national colony populations, and the magnitude of colony losses. This study also suggests that economic losses are much higher than the subsidies, which underlines the economic importance of honeybees for the agricultural sector.