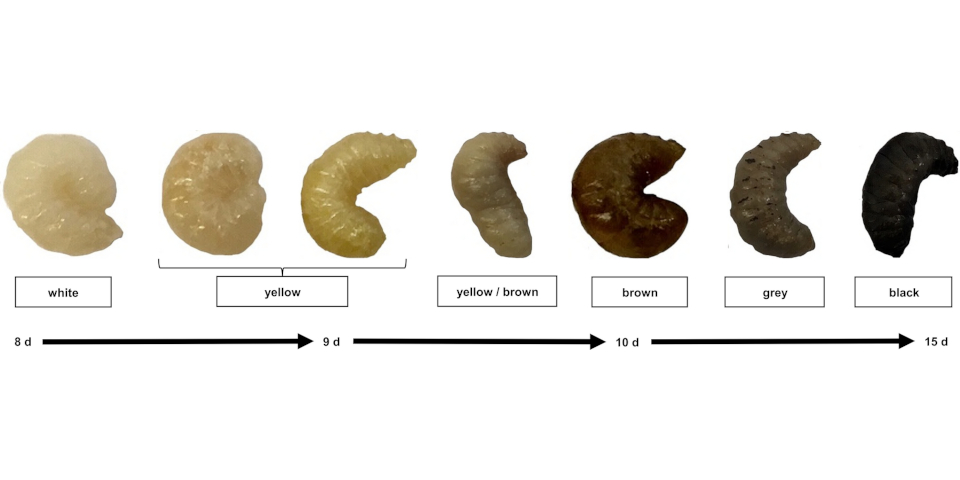 European foulbrood (EFB), caused by Melissococcus plutonius, is a globally distributed bacterial brood disease affecting Apis mellifera larvae. There is some evidence, even if under debate, that spreading of the disease within the colony is prevented by worker bees performing hygienic behaviour, including detection and removal of infected larvae. Olfactory cues (brood pheromones, signature mixtures, diagnostic substances) emitted by infected individuals may play a central role for hygienic bees to initiate the disease-specific behaviour. However, the mechanisms of cue detection and brood removal, causing hygienic behaviour in EFB affected colonies, are poorly understood. Here, coupled gas chromatography-mass spectrometry (GC–MS) was used to detect disease-specific substances, changes in cuticular hydrocarbon (CHC) profiles, and brood ester pheromones (BEPs) of honey bee larvae artificially infected with M. plutonius. Although no diagnostic substances were found in significant quantities, discriminant analysis revealed specific differences in CHC and BEP profiles of infected and healthy larvae. β-Ocimene, a volatile brood pheromone related to starvation and hygienic behaviour, was present in all larvae with highest quantities in healthy young larvae; whereas oleic acid, a non-volatile necromone, was present only in old infected larvae. Furthermore, γ-octalactone (newly discovered in A. mellifera in this study) was detectable in trace amounts only in infected larvae. We propose that the deviation from the olfactory profile of healthy brood is supposed to trigger hygienic behaviour in worker bees. To confirm the relevance of change in the chemical bouquet (CHCs, BEPs, γ-octalactone, etc.), a field colony bioassay is needed, using healthy brood and hygienic bees to determine if bouquet changes elicit hygienic behaviour.