Morphometric and mitochondrial variation of Apis mellifera L. and its relationship with geographical variables in parts of West and Central Africa 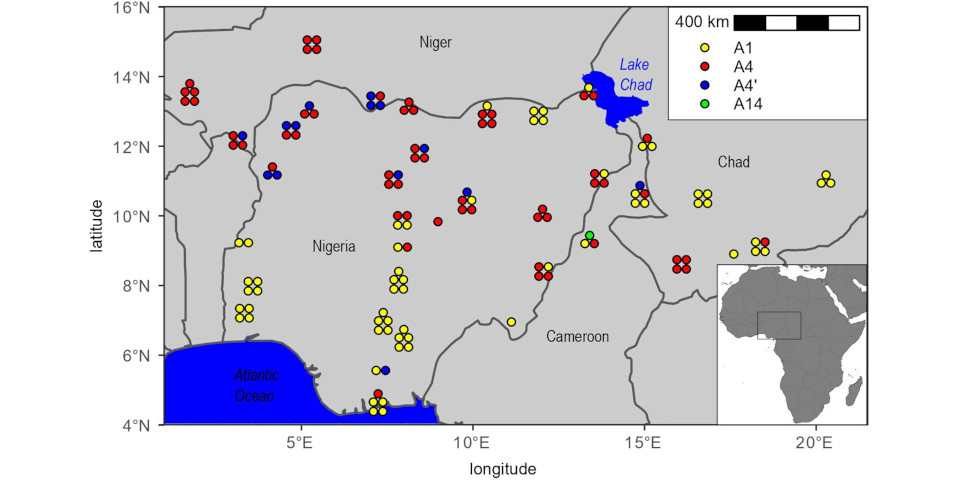 In order to investigate the geographical distribution of morphological and mitochondrial variation of the Western honey bee in West and Central Africa, 175 colonies, sampled from 44 localities (or a subset therefrom), were subjected to geometric morphometric (GM), traditional morphometric (TM) and mitochondrial DNA analyses. The shape of the forewing differed significantly between the three ecological zones (rainforest, savanna and Sahel) and significantly correlated with latitude, longitude and altitude. A one-way ANOVA revealed a highly significant difference between the ecological zones in respect of the size of the forewing. Based on TM, no clear geographic clustering was observed, and the samples could not be unambiguously assigned to reference data of A. m. adansonii or A. m. jemenitica. However, a conspicuous geographic pattern was observed, with bees increasing in size northward in the west of the area, but southward in the east. Four mitochondrial haplotypes, previously reported from Africa, were found: A1 (n = 60), A4 (n = 58), A4′ (n = 14) and A14 (n = 1). The overall haplotype diversity was low (h = 0.485 ± S. E. 0.062) and small bees were found to bear the A1 haplotype while large bees had either A4 or A4′ haplotype.