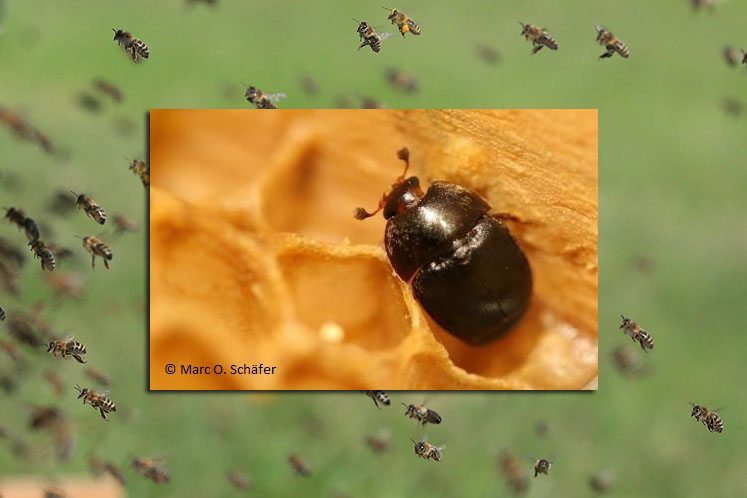 Today, scientists of the honey bee research association COLOSS1 have published an article2 in the peer reviewed journal Biological Invasions which provides an action plan on how to deal with new introductions of small hive beetles (Aethina tumida) into regions free of this honey bee pest. Their proposed course of action will help stakeholders all over the world to slow down the spread of this invasive species. But it’s not all good news. Large knowledge gaps were identified, signalling the urgent need for more research to stop this invasive species from becoming an even more severe global problem for beekeepers and pollination.

Small hive beetles are parasites and scavengers of social bee colonies endemic to sub-Saharan Africa but have become a widespread global invasive species, causing damage to apiculture and possibly also to wild bees. Although further spread seems inevitable, eradication of new introductions and containment of established ones is urgently required to slow down the invasion speed. The authors therefore propose a feasible plan involving all stakeholders. “Early detection is most important. Only if an introduction is detected before the beetles manage to spread into wild honey bee colonies will it be possible to eradicate,” says Norman Carreck, from the Laboratory of Apiculture and Social Insects at the University of Sussex, UK. “To achieve this, we need to raise awareness and have to educate all stakeholders about the beetle’s biology and how to recognize it”.

For early detection and successful eradication, it seems fundamental to ensure an adequate border control and to install sentinel apiary sites. After small hive beetles are officially detected, the competent authorities must implement epidemiological investigations to determine the population status to be able to decide between eradication or containment. Furthermore, a surveillance system should be activated and maintained. Sentinel colonies have to be installed at outbreak apiaries to lure free-flying SHBs that might have escaped eradication. However, the authors strongly suggest further scientific research to support their plan of action. “Much about the biology of the small hive beetle is still unknown” says Prof. Peter Neumann, co-author and president of COLOSS. “We urgently need to address fundamental research questions to enable adequate solutions for this invasive pest” he adds.

The authors suggest a combination of measures to decrease the chances of small hive beetles becoming established beyond their current distribution. These best practices should be adopted by competent authorities until further scientific insights are available to improve the plan of action suggested by the authors.