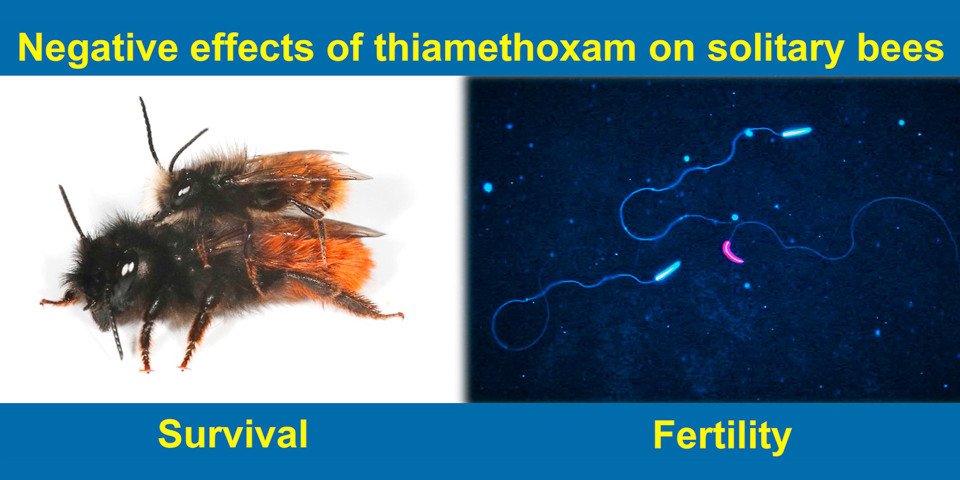 The ongoing loss of global biodiversity is endangering ecosystem functioning and human food security. While environmental pollutants are well known to reduce fertility, the potential effects of common neonicotinoid insecticides on insect fertility remain poorly understood. Here, we show that field-realistic neonicotinoid exposure can drastically impact male insect fertility. In the laboratory, male and female solitary bees Osmia cornuta were exposed to four concentrations of the neonicotinoid thiamethoxam to measure survival, food consumption, and sperm traits. Despite males being exposed to higher dosages of thiamethoxam, females revealed an overall increased hazard rate for survival; suggesting sex-specific differences in toxicological sensitivity. All tested sublethal concentrations (i.e., 1.5, 4.5 and 10 ng g−1) reduced sperm quantity by 57% and viability by 42% on average, with the lowest tested concentration leading to a reduction in total living sperm by 90%. As the tested sublethal concentrations match estimates of global neonicotinoid pollution, this reveals a plausible mechanism for population declines, thereby reflecting a realistic concern. An immediate reduction in environmental pollutants is required to decelerate the ongoing loss of biodiversity.