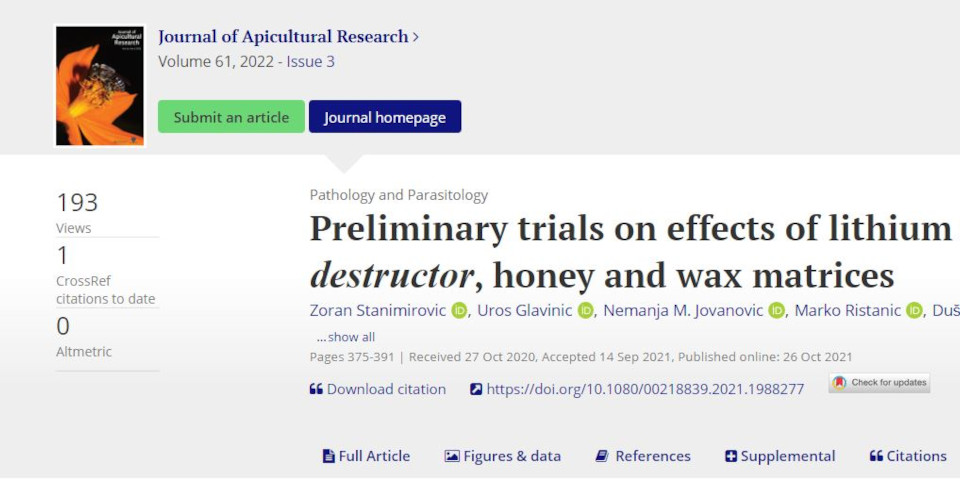 In a cage experiment, lithium chloride (LiCl) and lithium citrate hydrate (Li-cit) were tested for varroacidal efficacy and impact on bees. Treatment with Li-cit (4, 7.5, 10, and 25 mM) resulted in 100% varroacidal efficacy and 100% bee survival. Due to better results in the cage experiment, Li-cit was further tested in field experiments on full-sized free-flying colonies treated three times in 6-day intervals. All the concentrations of Li-cit in the field experiment (5, 10, 15, 20, and 25 mM) expressed high varroacidal efficacy: 93.2–95.5%, significantly (p < 0.01) greater than in the negative and positive (amitraz-treated) controls. Lithium residues in honey from brood chambers were much higher nine months after the last treatment (169.3–1756.0 μg/kg) than seven days post-treatment (19.2–27.8 μg/kg). In honey from honey chambers (eligible for human consumption), the average lithium residues were 26.9 μg/kg and 33.7 μg/kg seven days after the last treatment. In wax combs taken from the brood chamber nine months post-treatment, lithium residues ranged from 410 μg/kg to 2314 µg/kg, without significant differences from the negative control. Lithium residues in wax matrices seven days after the last treatment were in a narrow range of 234.3–300 µg/kg, in wax combs and cappings being significantly lower than in commercial wax foundations. For the first time, Li-cit proved to be effective against Varroa destructor under field conditions.