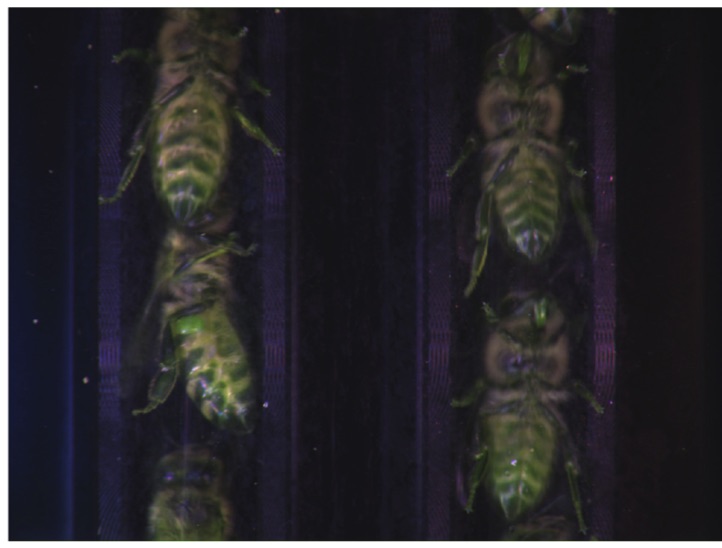 This paper presents a portable computer vision system, that is able to monitor the infestation level of the Varroa destructor mite in a beehive by recording a video sequence of live honeybees Apis mellifera for 5–20 min. A video monitoring unit with multispectral illumination and camera was designed to be placed in front of the beehive, where bees from a selected frame were shaken off. Subsequently, a computer vision algorithm (denoted as the Infestation Level Estimator) based on deep learning analysis of the video stream counted the number of honeybees and found the position of identified varroa mites. In this paper, the design and the algorithm that were used to determine the number of bees and mites are presented. Based on a video sequence with 1775 bees and 98 visual mites, the algorithm measured the infestation level to 5.80% compared to a ground truth of 5.52%. The algorithm had a high -score accuracy for counting bees (0.97), while the -score for detecting varroa mites was lower (0.91). The latter was due to mispredictions, which can be resolved by improving both the trained varroa classifier and the mechanical setup. Overall, the proposed computer vision system and algorithm showed a promising results in nondestructive and automatic monitoring of infestation levels in honeybee colonies and should be considered as an alternative to traditional methods, which require the killing of bees.