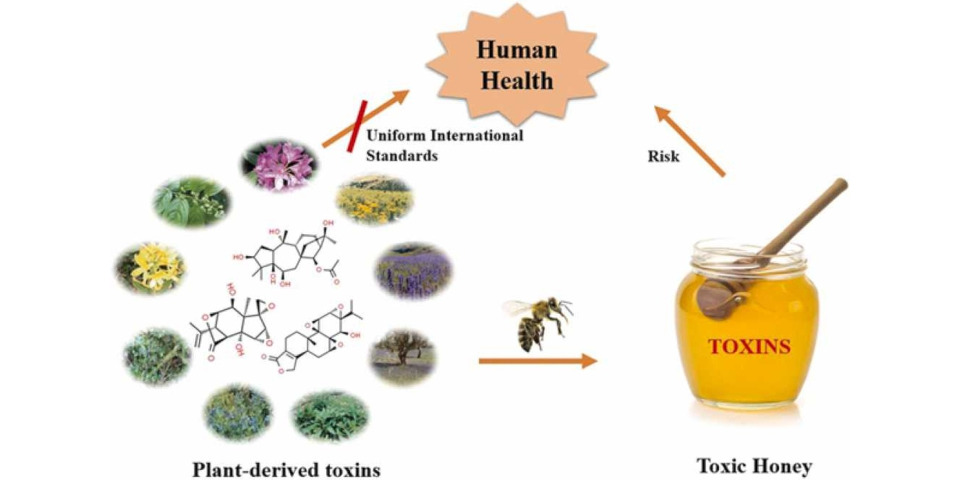 Consumers often believe that “natural food” is harmless, however naturally occurring toxins in food represent a health risk to humans. Honey as a natural, nutritious sweetener, is one of the most commonly consumed foods throughout the world. However, food safety concerns for honey arise when honeybees collect nectar from poisonous plants such as Rhododendron sp., Coriaria arborea, and Tripterygium wilfordii Hook F. Such honey contains natural plant toxins. Humans may develop intoxication symptoms after consuming toxic honey; in some cases, it can be fatal. As a result, toxic honey poses an often-ignored threat to public health. Typical plant toxins such as grayanotoxins, triptolides, tutin and pyrrolizidine alkaloids, have been identified in toxic honey. Although different toxic honeys elicit similar symptoms, such as vomiting, nausea, and dizziness, the mechanism of toxicity may be different. Thus, it is necessary to determine the exact toxicity mechanism of different toxins to further develop effective antidotes and cures. Another important challenge is preventing toxic honey from entering the food chain. Liquid chromatography-mass spectrometry has a wide range of applications in the detection of different toxins due to its accuracy and simplicity. More methods, however, are urgently needed to detect multiple plant-derived toxins in honey and its derivatives. Developing uniform international standards for toxin detection during quarantine using advanced techniques is critical for preventing human consumption of toxic honey.