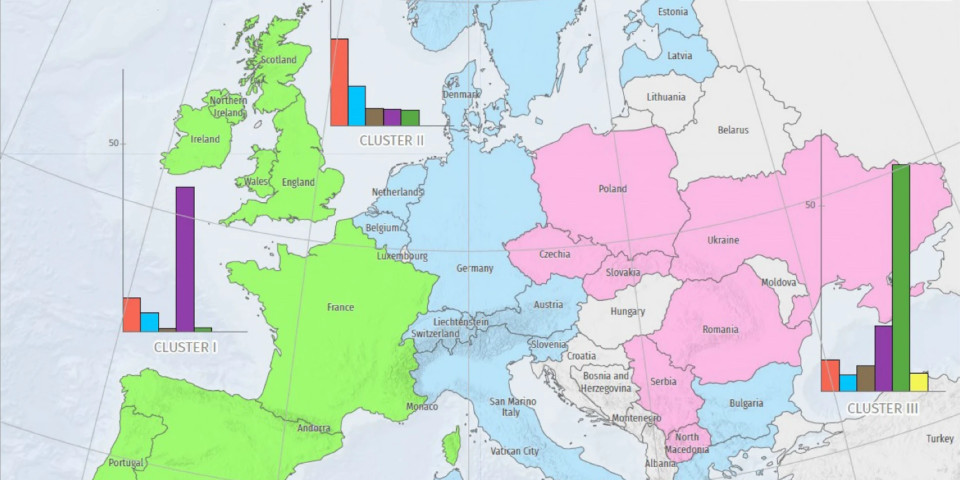 Beekeepers have various options to control the parasitic mite Varroa destructor in honey bee colonies, but no empirical data are available on the methods they apply in practice. We surveyed 28,409 beekeepers maintaining 507,641 colonies in 30 European countries concerning Varroa control methods. The set of 19 different Varroa diagnosis and control measures was taken from the annual COLOSS questionnaire on honey bee colony losses. The most frequent activities were monitoring of Varroa infestations, drone brood removal, various oxalic acid applications and formic acid applications. Correspondence analysis and hierarchical clustering on principal components showed that six Varroa control options (not necessarily the most used ones) significantly contribute to defining three distinctive clusters of countries in terms of Varroa control in Europe. Cluster I (eight Western European countries) is characterized by use of amitraz strips. Cluster II comprises 15 countries from Scandinavia, the Baltics, and Central-Southern Europe. This cluster is characterized by long-term formic acid treatments. Cluster III is characterized by dominant usage of amitraz fumigation and formed by seven Eastern European countries. The median number of different treatments applied per beekeeper was lowest in cluster III. Based on estimation of colony numbers in included countries, we extrapolated the proportions of colonies treated with different methods in Europe. This suggests that circa 62% of colonies in Europe are treated with amitraz, followed by oxalic acid for the next largest percentage of colonies. We discuss possible factors determining the choice of Varroa control measures in the different clusters.